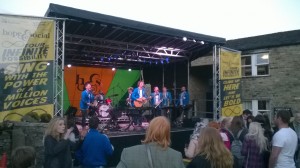 Sometimes you’re too close to something to appreciate how special it is. But with a bit of distance and time you realise what fantastic things a bunch of random people can achieve! Preceding Le Grand Depart in Yorkshire there was a parallel arts festival and one of the highlights was undoubtedly Hope and Social’s Tour of Infinite Possibility. This blog is not about how great it was or the band are (ok I have to agree they did steal the show at the team presentations opening ceremony!) but about how I witnessed and was a small part of a team working and co-operating together – now I think I understand what collaboration really means.

solar panels and bikes to power the stage;

a great film and photographic team;

some volunteers (including me!);

between c20 to c250 additional musicians for each site;

various musical instruments and many ukeles and dozens of hand bells;

and last but not least high vis jackets!

Let’s simply ignore the planning & logistics of rehearsing with the scores of additional band members (aged from 6 – 80) with varying degrees of musical ability across Yorkshire and just focus on 3 gigs a day over two weekends.

Every gig was different in many ways but the constant was the fantastic teamwork. Ben the band’s manager and Helen the event manager were phenomenal. They led by example and dared to care for everyone. There seemed to be no hierarchy and everyone valued and respected each other and everyone was included by the band. I think it worked so well because people shared a vision, looked out for one another, carried out their tasks under pressure and helped wherever a hand was needed. We shared the journeys, jokes, food, drinks, accommodation, the enthusiastic feedback of the crowds and stories about ourselves. The team was more like a liquid in that in flowed into the needs of each site and gig.

The band have such a sense of fun, openness and ability to communicate through their music that it becomes infectious.

The proof I guess wasn’t just the rave reviews and delighted participants and crowds, but the band of sisters and brothers that had formed lasting relationships. Sometime you get much more than you bargained for and the sum truly is much, much greater than the parts.

Get a flavour for the project here.

I also helped with the 12 Gigs of Christmas on 19 December around Leeds which was another collaboration and wonderful celebration for 2014. I received the following text from my friend Jamie:

“Hi Tim, hope you are well. Ange and I had a little boy yesterday. Bit of an ordeal but all is good. Given our H&S tickets for tonight to Steve, but we did notice that they are doing a gig in the LGI where we are. Don’t suppose you might know where in the LGI it is? Thought as a legitimate patient we might be able to go and see them as we are missing out tonight. Failing that we might venture out to the town hall steps if it’s not too cold for the little guy -:)”

The band greeted the couple and played 3 songs for them. You can watch the video of Hope and Social performing Eurospin dedicated to Jamie, Ange and their new addition Monty.

“That was amazing we loved it. Nice to see you enjoy the rest of the gigs.”

This time they were teaching songs to 50 people on 2 buses – you can hop on the story here:

Great project with 9 video makers for their new album – see the results here.